The Finnish connection to the Epstein Pedo Scandal

This addition has been integrated to the Epstein timeline.

Mysteriously, Epstein buys the mansion and also another smaller house nearby from Lake Worth through a mysterious company, Laurel Inc.

The company’s official address is in Tampere, Finland. 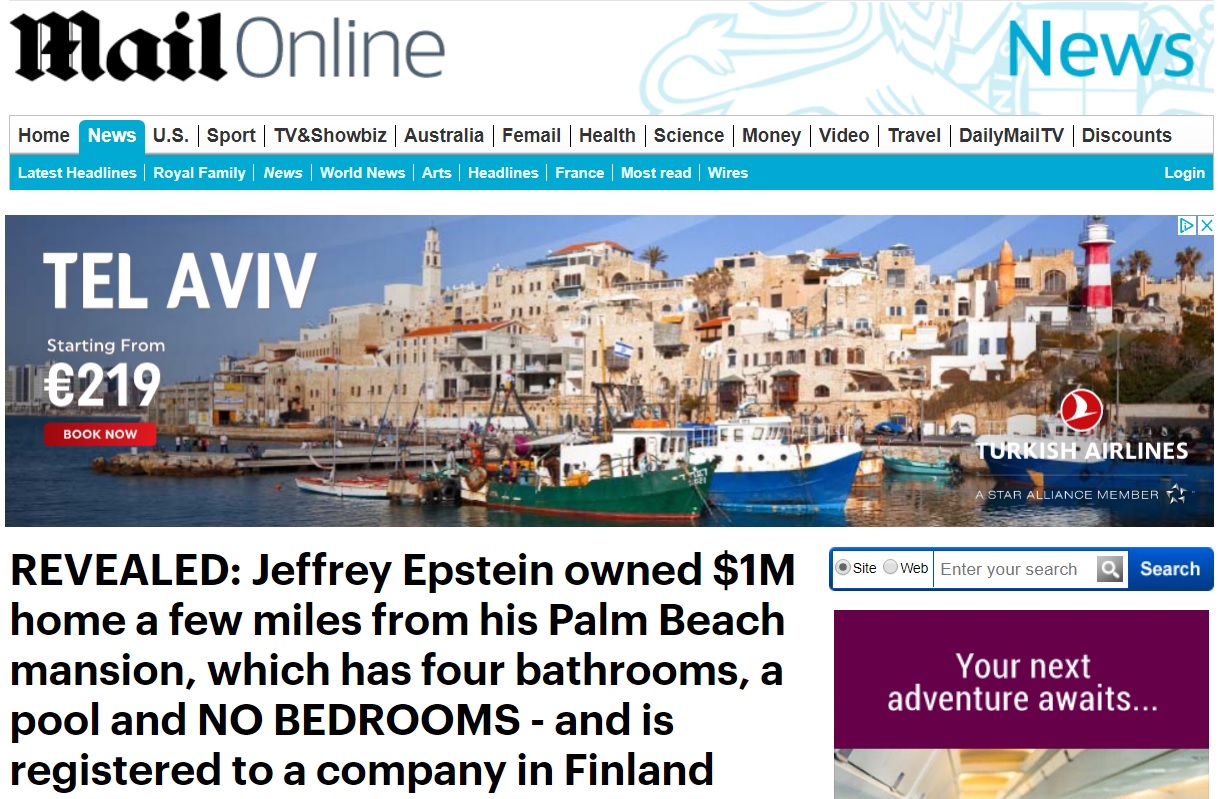 Why the Finnish connection?

Could it be that Robert Maxwell connected his protege, Epstein with the ultra-Zionist and mob-connected Finnish-British Zabludowich (J) family?

After all, Maxwell and the Zabludowich family had already in the 40s together smuggled arms to Jewish terrorist groups in Palestine. And one of the most useful of those arms turned out to be the Tampella mortars from Tampere, Finland.

Shlomo Zabludowich would create a joint arms manufacturing venture between Tampella and Israel. At the same time Poju would attend the Swedish-speaking school in Tampere and start there his business career.

That would explain the Finnish – or rather – the Tampere connection.

But why did not The Daily Mail point out the possible connection between Epstein – Tampere – Zabludowich?

Perhaps because The Daily Mail is a very pro-Zionist newspaper.

For over half a century the patriarch of the Zabludowich family, Shlomo and his son Poju have belonged to a close-knit group of ultra-Zionist billionaires.  They also seem to have close connections to the Kosher Nostra. Poju is even the biggest landowner in Las Vegas.

Poju has gone through unscathed many scandals from Panama papers to knocking down parts of a church. Poju has also been suspected of bribing Benjamin Netanyahu, the Prime Minister of Israel.

Naturally The Times of Israel called it a ”gifts affair”.

Poju was also involved in the Panama papers scandal.

Today’s Sunday Times notes that Poju Zabludowicz – a major donor to David Cameron’s Conservative Party – was involved in an offshore scheme managed by a firm involved in the ‘Panama Papers’ scandal.

Zabludowicz’s co-investor in this scheme – controversial businessman Scot Young – was found impaled on the railings outside his London flat in 2014. An inquest on Young’s death found insufficient evidence of suicide, and his family suspected he had been murdered.

Poju has also been caught in a sexual harassment scandal.

It certainly sounds like the Zabludovich family was in need of assistance in hiding assets, bribing officials and organizing sex parties.

The Florida properties made it even easier for Epstein to entertain important people and couple them with young girls.

Later it was revealed that on the walls of the Palm Beach mansion there were several photos of nude girls.

2 thoughts on “The Finnish connection to the Epstein Pedo Scandal”