Israeli and Russia connections to Epstein pedoscandal finally revealed in the British press. Trump behind the expose?

Youtube has already taken down four Epstein related videos. If this video is also taken down you can also find it here in Bitchute.

The first part in the ongoing Epstein-Ghislaine-Mossad saga was presented in the Epstein Pedoscandal Mossad Timeline. It showed  in detail how Jeffrey Epstein and Ghislaine Maxwell were working for the Israeli intelligence agencies, Mossad and Aman.

THE POWER OF THE MAXWELL FAMILY

This third part emphazises that it is not only Ghislaine but the Maxwell family that has been closely connected to both Mossad and Donald Trump.

As the Epstein Pedoscandal Mossad Timeline revealed, the Maxwell family is literally the first family of Israel. They command enormous respect since they have served Israel in so many crucial ways. Without the Maxwell family Israel might not even exist.

The respect the Maxwells have in Israel has been noted many times. Maxwell family friend Laura Goldman reports:

I was always active in the Jewish community scene so that’s how I got to know [Ghislaine’s sister] Isabel. I’ve travelled with her to Israel and people would literally stand up when she walked into a room, her family commands respect. (The Sun)

Obviously, the main reason why Epstein and Ghislaine were able to continue sex trafficking with impunity for so long was the the fact that they had the full support of Israel.

This seems to be the reason why the Clintons wanted so much to be friends with Epstein and Ghislaine.

It is well known that Bill Clinton was friends with Epstein and Ghislaine. 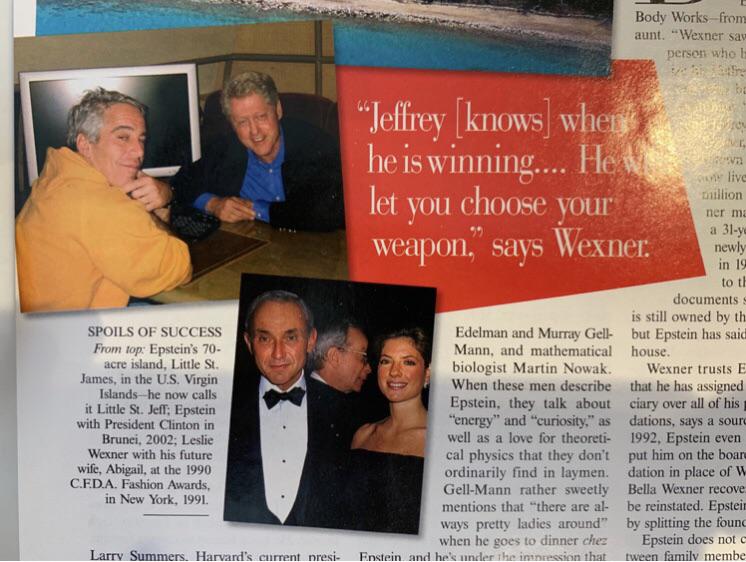 However, the British press has revealed that also Hillary and Chelsea Clinton were close to Epstein and Ghislaine.

Interestingly, there was an underground party area.

Another former contractor revealed Epstein built an underground club. In one picture from his New Mexico ranch, a staircase leads downstairs although there are no images of the actual ’club’.

’It’s an underground layer of 1,000 square feet. Like a nightclub, with stripper poles, it’s not directly underneath the house. Most activity took place there, like dancing, hanging out, it was the entertainment area, no one [staff] was allowed down there, they installed cameras down there,’ he said. (Daily Mail)

The Clintons probably believed that because of the Jewish and Israeli angle the mainstream media would not dare to expose their close relationship with Epstein and Ghislaine.

The British tabloids are finally talking about the Israeli connection.

This despite the fact that there is now also a related Russia connection.

John Dougan, who served as Deputy Sheriff in Palm Beach, Florida at the time Epstein was in prison for his first slew of child sex offenses, says he was given access to Epstein’s case file – including video tapes – in its entirety by Palm Beach Police Detective Joseph Recarey, who later died unexpectedly aged 50.

Dougan managed to copy the tapes, encrypt them and flee to Russia, where he now lives.

Although he has not watched the encrypted files he tells Epstein: Dead Men Tell No Tales that he is certain they contain blackmail material involving wealthy people – and that Prince Andrew was a target. (The Sun)

In November 2019 a book was published which revealed both the Israeli and Russia connections.

The possibility that Putin might have the Epstein tapes should have exploded the American media into a frenzy.

But not a beep. The American mainstream media was not interested.

Except for one exception.

Interestingly, Newsmax is connected both to the CIA and Donald Trump.

Is Trump giving a warning to Israel?

The Epstein Pedoscandal Mossad Timeline showed how it was the CIA man Donald Trump who helped Epstein and Ghislaine to create their pedo sex trafficking ring. After all, Epstein’s number 1 girl, Virginia Roberts was literally a Trump girl recruited from Mar-a-Lago by Ghislaine.

However, it was also Trump who seems to have exposed Epstein. Was this not only because Trump wanted leverage over Clintons but also because CIA wanted to have leverage over Mossad?

Perhaps CIA and Trump are at least not yet total slaves to Israel?

Of course there are no good guys in this international game of chess. All the major intelligence agencies – including CIA, MI6 and Mossad – run pedophile rings. Often they even cooperate just like Ghislaine (Mossad), Trump (CIA) and Prince Andrew (MI6) together helped create Epstein’s pedo sex trafficking ring.

Naturally Ghislaine’s role in all of this has been very important. After all, who has the best connections to the elite of Britain, America, Russia and Israel? Ghislaine, of course.

The Epstein Pedoscandal Mossad Timeline showed how Ghislaine’s father, the Jewish super spy Robert Maxwell had excellent connections to the Jewish oligarchs and Kosher Nostra not only in America but also in Britain, Russia and Israel.

It is the interconnected Jewish mafia and the Jewish billionaire oligarch network under the protection of Mossad that connects these countries like a spider’s web. And the super spy Ghislaine is the spider at the center of the web.

Ghislaine literally inherited the network from his father.

In that sense she also inherited Trump.

Melania Trump might also have been involved in this network especially because in the 80s she most probably was recruited by the feared Yugoslavia intelligence agency UBDA. It had good relations both to east and west. Melania would have been the perfect go-between just like Trump’s first wife, the probable Czech spy, Ivana Trump.

The Daily Mirror published a photo of them all together.

No wonder Trump was so close to both Ghislaine and Epstein.

It is the international Jewish oligarch and mafia network coordinated by Robert and Ghislaine Maxwell that has been supporting and financing Trump for decades.

The Maxwell family together with Epstein and the Jewish mafia probably helped not only to save Trump from total bankruptcy but also to expand his business.

Both the Russia collusion conspiracy and the Ukraine conspiracy for which Trump has now been impeached involve the Russian-Ukrainian mafia which in reality is the Jewish mafia.

Since the mafia and oligarch network that for decades supported Trump is largely Jewish and supported by Israel the mainstream media cannot expose it and therefore cannot nail Trump.

But they still try though in a roundabout way.

The Daily Beast has just revealed in detail the close connections between Trump and the Russian mafia. However, the article fails to mention the fact that the Trump connected ”Boss of bosses” of Russian mafia, Semion Mogilevich is a Jew who has an Israeli passport.

And where did Mogilevich get his Israeli passport? From Ghislaine’s father, Robert Maxwell.

Mogilevich is also known for sex trafficking young girls so it would not be surprising if already in the 70s and 80s Epstein and Ghislaine got their first taste of Eastern European sex slaves.

It also would not be surprising if Epstein’s and Ghislaine’s Jewish-Russian friend and pimp, Peter Listerman has close connections with Mogilevich and the Jewish mafia.

Listerman has such a bad reputation that he is shunned even in Ukraine!

Tatiana Savchenko, who founded the first modeling school in Odessa, Ukraine explained to the Daily Beast the lengths she had to go to keep Listerman from getting his hands on young women and trafficking them for sex work.

She claimed that he would frequently approach her students and attempt to lure them with promises of a luxurious lifestyle, and that “It took a lot of work to keep him from tricking our teen models in his traps.” (Citizen Truth)

Since the mainstream media cannot mention the J-word nor involve powerful Jews they have to go after Trump with half-bogus accusations.

And since those behind the impeachment are mostly Jews connected with elite Jews it seems that Israelis are pressuring more concessions from Trump.

When TruNews also tried to name the Jew their channel was removed from Youtube.

So it would not be surprising if Trump and CIA would try to use the Epstein pedoscandal as a leverage against Israel.

After all, the intelligence agencies also compete against each other. They all want to have leverage over everybody. Including their competitors.

It’s a game. And the girls are just disposable pawns.

Daily Mail’s source notes how Ghislaine is the key to the game.

‘Ghislaine is the key to everything. She’s the Queen Bee around which everything unfolded. She’s pivotal to determining the truth.’

No wonder Ghislaine is hiding.

The publicity created by the British media has pushed FBI to become more active. However, Ghislaine still has not been charged and FBI has not asked any help from Interpol.

Now at the beginning of the new year also the American media seems to be waking up. At least the celebrity gossip site Page Six.com is not too afraid to notice the role of Israel.

The source added of Ghislaine, who has homes in Manhattan and London, “She is not in the US, she moves around. She is sometimes in the UK, but most often in other countries, such as Israel, where her powerful contacts have provided her with safe houses and protection.” ..

The source also added, “If the US government was really interested in bringing in Ghislaine, the IRS would have looked at her tax returns and the income she may have got from Epstein and perhaps some of his powerful associates.”

It now seems certain Ghislaine is not going to be charged. After all, she could then reveal the role of Israel. Or at least the mainstream media might start asking too many questions about the obvious Israeli connection. The risk is just too great. Zev Shalev notes:

Ghislaine Maxwell knows the very real risk to her life if she is imprisoned which is likely what initiated discussions about cooperating with prosecutors. If she gets a deal she would need to admit what I publicly exposed, and what others were covering up. She and Epstein were Israeli agents. Cooperation agreements are predicated on truth after all, and she would have to reveal the very dirty things they duo did in the name of Israel.

In the Epstein Pedoscandal Mossad Timeline it was noted that Epstein and Ghislaine were protected by the CIA Director (2001-13) Robert Mueller. His successor James Comey obviously continued that protection. Moreover the whole Comey family seems to be involved.

Both James and Maureen Comey seem to be dragging their feet whenever powerful Jews should be prosecuted.

One reason might be that James Comey has always been close to the Israelis. And so seems to be his daughter, Maurene Comey who is married to Lucas Issacharoff.

Interestingly, already last summer the Daily Mail passingly noted Lucas Issacharoff and even provided a photograph of him.

Was this a hint?

The father of Lucas Issacharoff is the Jewish New York University School of Law professor, Samuel Issacharoff. He is famous not only for complex litigation but also for ”building democracy” in Bosnia and Iraq. This would make it easy for him to also cooperate with American and Israeli intelligence agencies.

His current interests also include the law of democratic participation—i.e., creating democracies in Bosnia and Iraq. This past summer he gave a talk on national security at Oxford University.

He’s toying with the idea of writing a book on constitutionalism and fractured societies. “This work is newer,” says Stanford Law School professor and vice dean, Mark Kelman, “but it’s incredibly interesting and likely to be important over the next decade as we think about democracy-building as a foreign policy issue. He’s one of the outstanding scholars of his generation.” (NYU Law Magazine)

However, despite the best efforts of the Israelis the Epstein pedo scandal is not going away.

At the Golden Globe ceremony in Hollywood even the comedian Ricky Gervais told the audience that Epstein didn’t kill himself.

Gervais also said: ”I know he is your friend.”

1 thought on “Israeli and Russia connections to Epstein pedoscandal finally revealed in the British press. Trump behind the expose?”