There are only 6 steps needed to rule the world.

The best and probably only way to rule the world is to have your own money machine. Then you can buy not only the opposition and the media but also the state itself, i.e. capture the state. This is why the Anglo-American Establishment has for centuries developed the fractional reserve banking system run by the Bank of England and the FED. In this way they can essentially create money out of nothing and thus create a hidden income transfer, i.e. literally steal money from everybody else.

The Anglo-American establishment is already 300 years old and composed of WASP and Jewish elite.

The fractional reserve banking system run by the FED is essentially a pyramid scheme.

The fractional reserve banking is so inherently bankrupt Ponzi scheme that a bank panic can destroy it at any time.

The taxpayers have been forced to bail out the bankrupt fractional reserve time again but this has only encouraged the ruling elite to go even further. Now the banking system is a multiple pyramid scheme that is close to total collapse.

To make matters even worse the fractional reserve banking system creates a business cycle that every ten years or so almost collapses the whole world economy. The FED chairman Ben Bernanke admitted that in 2008 total collapse was very close.

The collapse of the banking system must periodically be stopped by massive taxpayer bailouts.

The banking system is inherently unstable and only massive ever increasing bailouts can save it. The too big to fail doctrine only makes the whole system even more unstable.

In order to avoid constant bailouts it is important to artificially prop up the demand for dollars. One method is just to force countries to adopt the dollar as their currency (Panama). A more devious method is to force them to use dollars in foreign trade as a reserve currency. This can be done by forcing them to use dollars when buying oil. The artificially increased demand for petrodollars makes not only a bank panic less likely but also makes it possible to just print dollars and exchange them for commodities. In effect, other countries become economic colonies of America.

The ruling elite is still composed of the Rothschilds and the Rockefellers but Saudis have been added as the junior partner. U$Srael is born to protect the money machine. ($=FED, U$=USA, S=Saudis, rael=Israel)

Rockefellers get extra benefit of the petrodollar because now they can create an efficient oil cartel as well. Rothschilds also get extra benefit because the money machine finances their country, Israel and its wars. Saudis benefit not only financially but together with Israel they can Balkanize the Middle East by destroying the militarily strong rival Arab and Shia states.

U$Srael is a match made in heaven. Or rather in Hell. 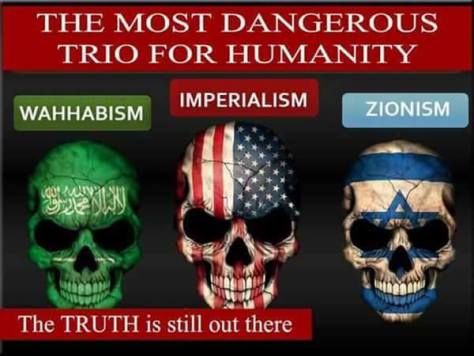 Both Saudis and Americans benefit financially but the greatest beneficiary is still Israel. Without the money machine Israel would probably not even have been born and certainly it could never have occupied all of Palestine. It is in the absolute national interest of Israel to protect the money machine. This is why the Jewish dominated academia and media plays down the destructive nature of fractional reserve banking and economic imperialism. This is also why Israel is willing to orchestrate ever more outrageous false flags and genocides.

Not all countries want to be economic colonies of U$Srael. Some even refuse or want to limit the use of petrodollars.

However, Russia and China are not against fractional reserve banking. In fact they love it. They just want to have their own money machine or at least not be totally dependent on the American dollar. Russia and China want to be equal partners in crime. Or at least junior partners. They do not want to be economic colonies of U$Srael.

The conflict is only about the relative power of the members of the ruling elite. Russia and China just try to obtain a better deal from U$Srael and thus threaten the petrodollar by using it less. They also encourage their allies to decrease their use of petrodollars.

U$Srael uses its money machine to finance an enormous war machine which is composed of the militaries of America, Nato, Israel and other allies of America. The strongest part of this war machine is naturally the American military. However, Israel is almost as important because it concentrates on dirty wars that are waged by deception. In addition to a strong global military force you also need to control organised crime and terrorist organizations. Only then can you really manipulate and control the world.

This American-Israeli war machine then defends the ruling elite and its money machine trying to destroy all those countries who refuse to use the reserve currency, i.e. petrodollar. This is the main reason why both Russia and China is demonized in the western media.

Russia and China must be encircled, their governments must be toppled and their empires broken into pieces. However, the Rockefellers are not keen on war unlike Israel that is furious that Russia and China dare support its enemies in the Middle East.

If Russia, China and their allies cannot be attacked directly then U$Srael tries to topple their governments by supporting all opposition groups including organized crime and terrorist groups. Israel and Saudi Arabia even go so far that they together create and supply radical Islamist groups like ISIS.

Especially Gaddafi had to be destroyed and raped because he actually planned to create a gold currency.

Also Syria had to go. However, the Rothschild led Israel Lobby is not all-powerful. The Rockefellers did not want to destroy Syria because it is not a big oil producer and because they do not want Israel to become too powerful. Thus Syria was saved.

In America only Ron Paul and Tulsi Gabbard dare to oppose the war mongering bankers and Zionists.

Normal people are not aware what is happening because they have been brainwashed.

Propping up the banking system with brute force is risky. People might actually wake up. A more efficient way to prop up the dollar is to make sure other currencies do not compete with it. This is why the mighty German Mark was liquidated by merging most European currencies into one weak currency, the Euro.

However, there is always the danger that the euro currency union will break up. Therefore it had to be turned into an political union, the European Union. This also makes it easier to organize massive bailouts for the banks.

However, there is always the danger that the EU will break up when countries start seceding just like Britain did. This is why it is important to create anti-nationalist and globalist ideas not only with cultural Marxism and the police state but also by importing hordes of immigrants.

Creating currency blocks is not enough because there is still competition between them. Currency competition must be eradicated by merging all important currencies into a world currency managed by a world central bank dominated by U$Srael. A global police state would crush all opposition and force people to use only one digital currency.  Only then can bank panics finally be eliminated and the ruling elite can sleep peacefully.

The only way to save humanity is to end fractional reserve banking. Hopefully Switzerland is showing us the way. Couple of years ago there was a referendum. Naturally the bankers won but perhaps some day another referendum will finally crush them. A free Switzerland could then create a positive domino effect and save the world.

Laws of History and The Rule of U$Srael

6 thoughts on “Six Steps To Global Hegemony. How U$Srael Rules The World”